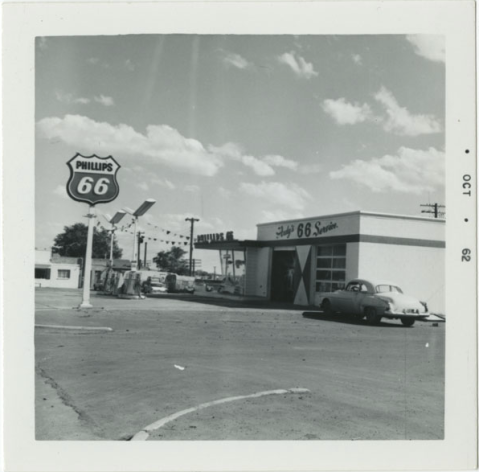 A few months ago, I was browsing a record store in Austin, Texas, and came upon a 45 that caught my attention. It was by a band called Stonehenge, released on the Nik label out of Grants, New Mexico. After listening to both sides, “Riddle at My Side” b/w “When I Go,” I bought the record for a few dollars. It proved to be by a band that inhabited a particular stylistic space that existed briefly in the early 1970s, one that attempted to build on psychedelia and the experimentation of the 1960s while still remaining innovative and fresh. It was a period in which the sound of the decade had not yet been nailed down, before light AOR and arena rock dominated the industry. It was only after getting home and connecting the dots that I realized that I had come across the band before.

A few years ago a collector posted the audio of an earlier disc by the same band to Youtube. The description touted the disc as being by an “insane undiscovered New Mexico psych group.” Anyone familiar with the ways of record collectors knows that this sort of hyperbole is common; collectors tend to get excited when a discovery of their own becomes part of the pantheon of collectibles. The disc in question—“King Snake” b/w “The Country’s Where I’ve Got to Take My Mind,” released on the Bozo label, also out of Grants—although not particularly “insane,” was indeed a bit of a find. At the time, it was the only known single by the group. The Youtube poster estimated the disc to date from around the turn of the decade, 1969 or 1970, based on its sound. As we shall see, this estimate is likely a bit early. As I’ve pointed out in previous posts, anachronism is so rampant in the world of private press discs that attempting to date a record based on stylistic evidence can often lead a researcher down a false trail, and sometimes into the wrong decade.

At first listen, “King Snake” sounded as if a vocalist with early 1960s folk boom sensibilities hooked up with a band whose influences were more contemporary. It reminded me a bit of The Spike Drivers or The Misty Wizards, bands that also merged an earlier folk sensibility with light psych. The tension created by the clash of these two styles is exactly the sort of thing that makes these self-released 45s so interesting. The disc also had several other qualities that piqued my interest. It was recorded by a band from the middle of nowhere, playing a style of music that was fast becoming passé on the national scene, and was released on a vanity label. As anyone who collects this sort of material knows, hearing a record on Youtube is often as close as you will ever get to it, as the number of known copies of some of these discs runs in the low single digits. So I listened to the Youtube clip a few times and then quickly forgot about it.

Having discovered a second disc by the band, my natural instincts as a vinyl detective took over. The evidence of Stonehenge’s existence is somewhat fragmentary, but in time I was able to piece together something of a narrative, some of which is admittedly hypothetical. On July 23, 1971, the Albuquerque Journal ran a small article announcing that “Scott Tregembo and Millie Warden, a duo known as Stonehenge” would provide entertainment for that week’s meeting of the Albuquerque Press Club. It added that, “the Stonehenge duet specializes in Beatles and Simon and Garfunkel songs.” At the time, Tregembo was only 17 and just about to start his senior year at Grants High School. At some point the duo connected with other musicians and became a full band, still using the name Stonehenge. On July 31, 1973, an article in the Gallup, New Mexico, Independent mentioned that the band had performed at a Lions Club fundraiser the previous week. Over the following year the group performed regularly at the Gallup Country Club, providing musical accompaniment for events that included a golf tournament after party, a Hawaiian luau, and a toga party that promised “decadent surprises.” Several articles in the Independent confirmed that the band was from Grants, about an hour east of Gallup, but none of them mentioned personnel.

Based on the publishing information and the numbering scheme, both of the band’s discs were recorded at John Wagner’s studio in Albuquerque. Wagner’s operation was pretty much New Mexico’s premier studio in the early 1970s, having recorded such luminaries as Tony Joe White, Richie Havens, Delaney Bramlett, and Rare Earth. Probably more interesting to readers of this blog, Wagner also recorded The Guitar Ensemble’s first album, The You-N-You, and the Zuni Midnighters’ My Land LP. Since all four songs on the two Stonehenge 45s were written by M. Norris, it is likely that he or she was a band member. Intriguingly, the first disc was engineered by one Paul Norris, a hint that there may have been family connections within the band. Comparing the release numbers to other private press discs with known dates to emerge from Wagner’s studio, I would date “King Snake” to 1972 or even early 1973. The follow up release on Nik could have been as late as 1974. As a full band, Stonehenge performed live from at least late 1973 and throughout 1974. After that, they vanish from the documentary record. 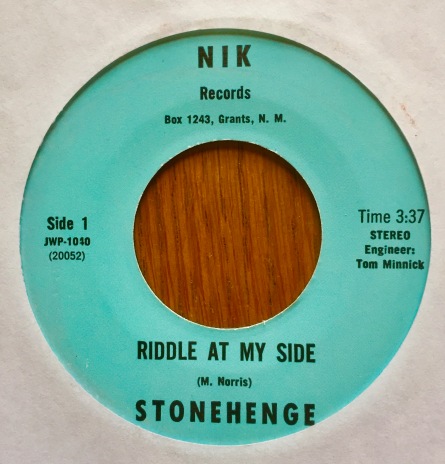 The band’s complete lineup is still a bit of a mystery. The female voice heard on the discs is presumably Millie Warden, and it seems likely that the songwriter M. Norris was also part of the group. Otherwise, Scott Tregembo is the only member we know anything about. He was born in Ironwood, Michigan, but at some point during his childhood his family relocated to New Mexico. The fact that he was performing professional gigs in the “big city” of Albuquerque while still in high school marks him as something of a prodigy. He was later known as a bass player, so it’s likely that this was also his instrument in Stonehenge. In 1975 he opened a music store, Scott’s Music Shop, in Corrales, New Mexico, a suburb of Albuquerque. By the early 1980s he had become something of a skilled woodworker and opened a cabinet shop in Albuquerque. He never quit music and continued to play bass in a number of local bands throughout the rest of his life. He died in October 2017, at the age of 63.

It has always intrigued me that by relying solely on recorded output, we generally get a completely skewed snapshot of a band’s reality. For most of the obscure bands that interest us here, the only thing that survives are the 45s they released. Most often these 45s contain original material by the band. The repertoire of any working local band in the 1960s or 1970s, however, was usually primarily cover tunes. The original material made it to disc, but it’s inconceivable that a local band playing regularly at a country club in a small city in the far-flung reaches of New Mexico in the 1970s did not give the crowd a full serving of the hit songs they expected to hear. Hopefully, though, audiences were open minded and receptive enough that Stonehenge was able to slip in the occasional original tune, especially if their 45s were sold at gigs. For me, the original material on the surviving vinyl artifacts reflects the pinnacle of what these local bands could achieve. Although Stonehenge may have been damned to play “Bridge Over Troubled Water” ad nauseam at shows in order to earn its daily bread, once in the studio the band members were free to show us their art, the content of their collective soul.

One thought on “New Mexico’s Stonehenge”