During the summer of 1980, I was an exchange student in a small town in Germany. Its medieval walls and picturesque town gate gave the place a humble charm that belied its location in the midst of the lignite coal fields, the huge expanse of open pit mines that fill large chunks of the landscape between Cologne and the Dutch border. The town’s only skyline was the silhouette of the cooling towers of the nearby Niederaußem Power Station, a plant that still spews more mercury than most any other in Europe. I was already music-obsessed in those days. The summer’s soundtrack was determined by what was available to me: weekly episodes of John Peel’s show via the British Forces Broadcasting Service, and vinyl copies of the The Nina Hagen Band’s debut, Devo’s first album, and Kraftwerk’s Die Mensch-Maschine.

I didn’t realize it at the time, but two of these albums had been recorded within an hour’s journey from where I sat listening to them: Kraftwerk at their own Klingklang Studio in Düsseldorf, and Devo at Conny Plank’s studio in Wolperath, east of Cologne. My attention at the time was attuned to what was going on in the UK scene, so I had not yet learned of Germany’s huge role in the creation of the music I loved. The radio waves in that part of Europe at the time were actually pretty bleak, filled with Sheena Easton’s “9 to 5” and Udo Lindenberg’s German-language version of “Born to Be Wild.” Using an old 1960s multi-band console radio, however, it was possible to dial up the exotic. I heard broadcasts in Hungarian and Polish, and could easily get the English-language service of Radio Kiev. These were still the days of classic Soviet propaganda; each phrase the announcer spoke in her crisp, precise pronunciation simply oozed ideology. Then one evening while scanning the airwaves, I came across something truly bizarre.

The station I hit upon featured a woman’s voice speaking clusters of numbers in German. I listened for some minutes, expecting the broadcast to move on to something different—a station identification, an announcer—anything that would provide more information as to what I was hearing. But the voice just continued speaking numbers. I couldn’t be sure given its length, but after a while I began to suspect that perhaps the broadcast was on a loop, endlessly repeating itself. Being in the heart of western Europe in the midst of the Cold War, the idea that the station could somehow be linked to espionage did occur to me. Coming across a similar station a week or two later that was broadcasting numbers in Russian only increased this suspicion. Soon these stations became my favorite things to listen to in the evening. There was a hypnotic, soothing quality about them. The emotionless intonation of foreign words spoken in a flat dead studio space created something akin to an experimental ambient soundtrack. At the time, I thought this was my personal revelation, something practically undiscovered by others. Years later, in 1997, I was very surprised to see the release of a 4-CD box set called The Conet Project. Someone had not only collected more examples of these stations than I ever dreamed existed, but had even written a 72-page booklet about them, creating something of a typology in the process.

Austin-based Stefan Keydel, who records under the name Dreihasenbild, also spent a chunk of the early 1980s in Germany. According to his website, he “uses wood (violin) and wire (synths from Moog and Teenage Engineering) to conjure up an otherworldly journey into the realm of hauntronica.” The specters of Düsseldorf and Wolperath decidedly haunt Dreihasenbild’s sound. The result is not simply some retro pastiche, however, but a fully contemporary expression that uses 80s Euro-electronica as foundation and toolkit, while still operating firmly from within this century.

Dreihasenbild is the German word for the “three hares,” a motif showing three rabbits or hares chasing each other in a circle. It is usually found as an architectural element across Eurasia, most commonly in Britain and Germany. Although thought to represent the Trinity when used in churches, like many folkloric motifs its original meaning is lost to time. Keydel put out two digital works under this name in 2018. But this month marks the release of the project’s first physical artifact, a vinyl 45 on his own Wet Barbed Wire label. 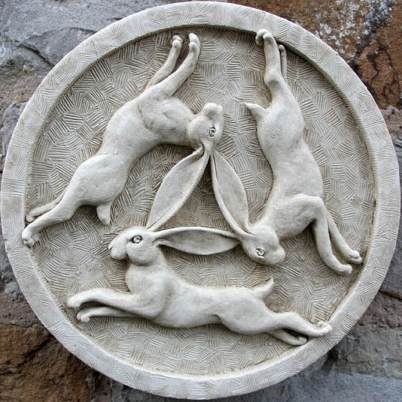 “Visitation” opens with a slowed-down sample from “Swedish Rhapsody,” one of the better-known tracks on the Conet Project CD. This sample, used with the permission of Conet compiler Akin Fernandez, was originally recorded from a German-language numbers station used by the Polish intelligence services. As an identifier, it used a music box playing a snippet of Hugo Alfvén’s “Swedish Rhapsody No. 1” as its interval signal. (Although there is some debate among numbers stations supergeeks as to whether the tune is actually one called “Luxembourg Polka.”) The track then moves into a hauntingly beautiful interplay between synthesizer and violin. The music is hugely cinematic in the way it completely transports the listener into its own narrative. Despite its graceful formality, the composition crackles at the edges with reminders that we should perhaps not get too comfortable. Its honey-colored tones are fraught with Eastern bloc paranoia, especially when what sounds like a young girl’s voice begins speaking a series of numbers through a heavy wall of distortion and static. The knowledge that this voice was not that of a young girl at all, but of a machine developed by the East German secret police known as a Sprach-Morse-Generator, only adds to the creep factor. You can almost see the antennae bristling atop the Polish embassy.

Although the disc’s B-side also incorporates a voice from the past seeping into the present, “Return” is a more understated ambient track. As a form, ambient music is generally composed to be unobtrusive and to work as a neutral background. Because of this, even the most effective ambient compositions can sometimes be little more than pleasant aural wallpaper. (Keeping in mind that even the creation of wallpaper can be a high art.) While “Return” could easily work as mood music for a slightly edgy cocktail party, it also possesses a certain arc, a certain drama, that recommends it to the more attentive listener. There’s something of a narrative structure here, an introduction followed by a sense of action rising to a climax, which then tumbles towards a resolution. In the end, we are left with only the voice of a Scottish miner speaking in a metrical sing-song through a rainstorm of static. Originally recorded in 1917, the fact that we can hear this voice at all is a gift to the present made possible by the cutting-edge technology of that era.

Listening to Dreihasenbild’s new release, the idea keeps recurring to me that 1980 is the disc’s default setting. Although I’m fairly certain that neither were direct influences, I hear echoes of Tuxedomoon’s use of “wood and wire” as well as Popul Vuh’s more ambient moments. In his book Ghosts of My Life: Writings on Depression, Hauntology, and Lost Futures, the late Mark Fisher referred to the electronic sound of the later 1970s and early 1980s as popular modernism. He pointed out that using technology to “allow new forms to emerge” was a “paradigmatically modernist” move, even when a work drew on older sources as its starting point. The danger of working in this mode is that it can lead to charges of rose-colored romanticism, of a desire to return to lost “good old days.” Fisher countered this view, however, by offering Fredric Jameson’s take on nostalgia, in which a longing is not for an historical period, but for a form. For me, the new Dreihasenbild disc is a good example of this Jamesonian nostalgia-that-is-not-nostalgia. Its haunting atmospheres suggest not a desire to return to 1980, but a longing to recapture a specific vision of the future that had developed by that period, one that was never realized. This was a future tinged with paranoia and possessing a cold, technological substrate—computers, synthesizers, and drum machines—that was nevertheless still kind, ethical, hopeful, aesthetic, and heartbreakingly romantic.

Dreihasenbild’s new release can be ordered on its Bandcamp page.

(Full disclosure: I have known Stefan Keydel for some 20 years and he is a member of my current band. Nevertheless, my comments here are sincere.)