I can’t remember where I picked up my copy of Norman André’s 1966 single “Big Rig Man,” but I’m certain I didn’t pay more than a dollar for it. But when confronted with a picture sleeve showing a lutenist standing inside a semi trailer, apparently serenading the cab of an adjacent Mack, what sensible person would not be tempted to take the disc home? 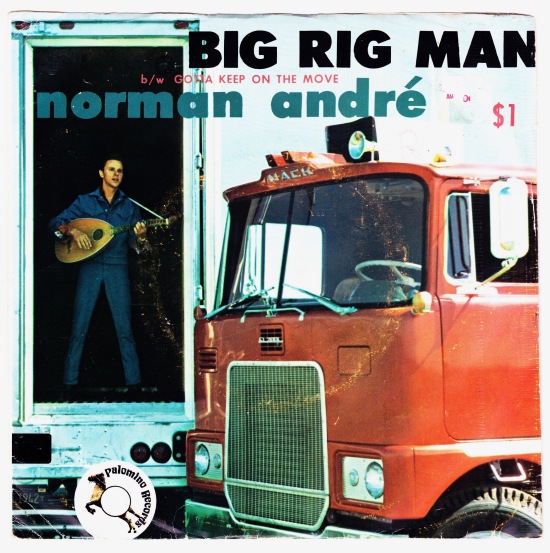 In August 1966 Billboard magazine announced that a new label, Palomino Records, was “tying in with the trucking industry to promote its debut disc.” The release was Norman André’s “Big Rig Man” b/w “Gotta Keep on the Move.” The article named Michael Parkhurst as label president and also mentioned that the disc was the theme from the film Big Rig, “produced by the parent company, Hollywood Continental pictures [sic].” Billboard called the record a “public relations image builder for the trucking field, with heavy load vehicles reportedly carrying posters for the disc, and truck stops phoning local radio stations to request airplay and stocking it on their jukeboxes.” The article also mentioned that Overdrive magazine, a major trucking trade publication, was “running a DJ contest with the label, asking DJs to write and tape an editorial on the importance of trucking to their area.” First prize was a trip to Tahiti. What the article did not say was that Mike Parkhurst was also the founder and editor of Overdrive (as well as being a rabid opponent of the Teamsters union and fervent supporter of the independent trucker). So, in reality, the release was not a trucking industry tie-in, but something that emerged from inside the industry itself. 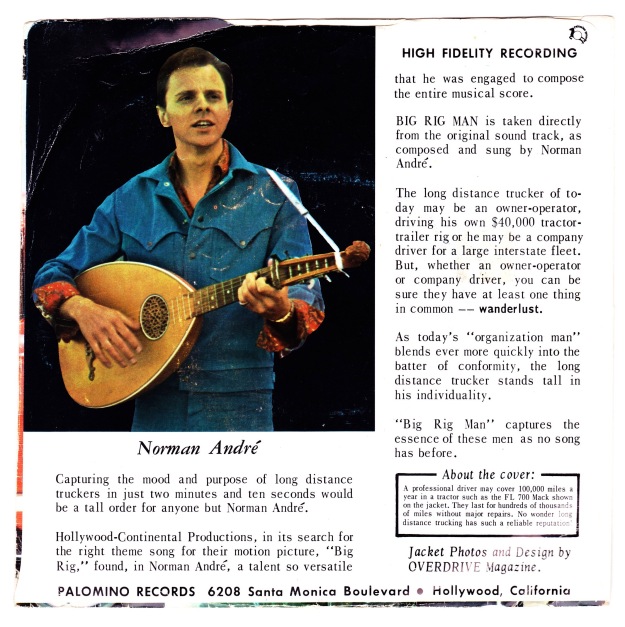 Norman André was the pseudonym of songwriter and composer Norman Andre Anderson. The reason we remember his name today at all centers around his association with Parkhurst. The most striking thing about Anderson is that though he penned rather straightforward, mainstream country tunes, his instrument of choice—at least around 1966—was a modified lute. Pictures show him playing an instrument with a lute body, a shortened standard guitar neck, and a “straight” headstock (as opposed to the head being bent backwards as is standard on both the traditional lute and its middle eastern variations such as the oud.) The sound of the instrument on “Big Rig Man” is not ethnic or “folkloric” as one might guess, but more like a boxy, cheap acoustic guitar providing the competent chug and shuffle that drives the tune. Sonically it works, but it is a curious choice of instrument when planning to market a record to an audience of truck drivers in the mid-1960s.

It seems that when Parkhurst decided to enter the arena of trucksploitation cinema he knew that music would help sell his film. Low budget films require low budget composers, however, so he set out to find someone who could do the job without breaking the bank. It is not known how Parkhurst and Anderson first met, but Big Rig was evidently in the planning stages as early as 1965. A promo disc of “Big Rig Man,” credited to Norman André and mentioning the film, was released on the tiny Martay Records label that year. It is not clear why Parkhurst saw the need to re-release the disc on his own label the following year, but as the Martay disc seems to be pretty rare, it is likely that only a handful were pressed. Once he decided to unleash a big promotion campaign, it only made sense to go with a full release of the disc. As part of this promotion, the July 1966 issue of Overdrive carried a long article on the record and the film. The cover featured Norman André, lute in hand, superimposed over a shot of two rigs sitting in a truck stop parking lot. Given the context, this was a decidedly surreal image, and is quite likely the only time in history a lute has appeared on the cover of a major trucking magazine.

Later in 1966 Palomino released a second Norman André single, “I Don’t Like Women With Hairy Legs” b/w “I Don’t Like You,” but it’s not clear whether this disc was intended to have any link to the film. The somewhat elaborate promotional campaign would suggest that Big Rig was originally intended to be a feature film. Whatever the original intent, the film eventually surfaced (however briefly) as a 30-minute documentary “shot on location from California to Massachusetts.” It was not until a few years later that a Parkhurst-directed trucksploitation feature film—scored by André now using his real name, Norman A. Anderson—finally did appear.

Filmed in West Texas and around Tucson in 1969 and 1970, Moonfire, the feature film that Parkhurst eventually released, had its world premiere at the Cinema Theater in Columbiana, Ohio, on May 12, 1972, with some 250 truckers reportedly in attendance. According to an article in the previous day’s Salem News, the film was being debuted in Columbiana because Parkhurst got his start in the trucking business “twenty years ago” driving for a local farm bureau there. The “G-rated adventure film about truckers” starred Charles Napier, probably best remembered from his appearances in a number of Russ Meyer films, and boxing legend Sonny Liston, who died shortly after filming. While Anderson contributed the score to the film, the soundtrack was given star power by a pair of tunes also written by Anderson but performed by Marty Robbins. These tracks, “Wheel of Life” b/w “Get You Off My Mind,” were released as a promo-only 45 on Palomino in 1972.

Trucking songs already had a long history by the time “Big Rig Man” appeared. Although there are likely earlier examples, Terry Fell’s 1954 recording of his “Truck Drivin’ Man” provided a template for later artists to build upon. The sub-genre reached its apex by the mid-1960s, with big hits by artists such as Dave Dudley and Dick Curless, as well as the appearance of interesting low-budget compilation LPs like Starday’s 1963 Diesel Smoke, Dangerous Curves. Truck driving as a cinematic subject has an even longer history, Raoul Walsh’s They Drive by Night (1940) and Henri-Georges Clouzot’s 1953 film version of Georges Arnaud’s novel Le salaire de la peur being a couple of classic examples. The 1970s saw something of an explosion of what would later be termed “trucksploitation cinema.” The release of these mostly low-budget films coincided with a popular obsession with both long-haul trucking and the citizen’s band radio, culminating in 1977 with the release of Smokey and the Bandit on one hand and Sorcerer (an updated take on Arnaud’s Le salaire de la peur) on the other.

Looking at these films chronologically, it becomes apparent that Parkhurst’s Moonfire was the first of this new wave of trucksploitation films. (Although some might include Spielberg’s 1971 TV movie, Duel, I would argue that despite the presence of a big rig in the film, it is much more a psychological thriller and has little in common with the low-brow “trucker buddy” films that followed it.) Although this may place Moonfire in an important position when studying the history of the sub-genre, artistically it was not a successful film. It opens promisingly enough with a long shot of trucks driving across an early evening desert landscape, with the voice of Marty Robbins singing the effective, Anderson-penned theme song “Wheel of Life.” The opening sequence has the gritty aesthetic of many low-budget movies of the era. But the moment the title sequence ends, the viewer is suddenly thrust into cheesy anachronism. This isn’t a trucker version of Two Lane Black Top. The best comparison I can make would be to James Landis’ 1964 The Nasty Rabbit, starring Arch Hall, Jr. The cinematography and location shots are interesting, but the film itself is one big cliché, filled with stereotypical (and somewhat offensive) Mexican villains, a missile plot, and even a renegade Nazi who must be defeated by our hero truckers. Overall the film plays like something that may have gotten mildly positive response from drive-in audiences in 1964, but not in 1972.

The question lurking behind all of this is, why did the publisher of an industry trade magazine decide to launch a “public relations image builder for the trucking field”? Shouldn’t the companies that actually run the trucks be more concerned with how the industry is viewed by the public? Granted, the fascination with trucking that exploded in the mid-1970s may have increased the readership of Parkhurst’s magazine, but there was no way he could have foreseen this. With the previous success of trucker-themed country records, a trucking-related zeitgeist was already in the air by the mid-60s and it was only a matter of time before the film industry would respond. On one level Parkhurst’s early entry into this field can be interpreted as culturally savvy or even prescient. The cynical view, however, would be that he was simply interested in expanding his operations into film and music, fields that were seen as far “sexier” than magazine publishing, and used his industry connections to best possible advantage.